The transport of the necessary equipment to the Lost Squadron area, and its
transport back, accompanied by the recovered planes, presents a considerable
challenge.

The nearest airstrip is that of Kulusuk, very near Tasiilaq, the biggest
community on the east coast. The seaport on the east coast however is only
open in July and August. The rest of the year pack-ice forms an impassable barrier.
July is way too late for the project, as due to weather conditions it has to be
finished by mid October.

So all the equipment must be hauled to the west coast of Greenland from where
it is currently located. There the containers will be load on sledges and pulled
by “PistenBullys” all across the ice cap. Work-force, press and
logistics teams will be flown from Kulusuk to the Lost Squadron area.

Smaller goods, additional equipment and adequate supply will be flown
in with our wheel/ski-plane from Reykjavik or Kulusuk. 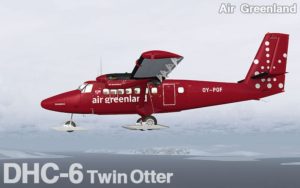